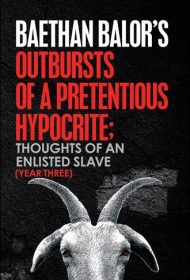 In essence, the book is a journal that starts in November of 2018 and ends in November of 2019. The narrative is personal, and the writing inhabits an interstitial space between fiction and memoir, melding the author’s thoughts and experiences with short stories, philosophical observations, and quotes from a variety of writers and thinkers such as Charles Bukowski, Ayn Rand, and John Locke.

Between trips, life changes, relationships, observations, and daily life, Outbursts of a Pretentious Hypocrite offers some interesting insights and skillful writing. For example, Balor has a knack for looking beyond what’s in front of his eyes: “The mirror’s reflection is a farce, a concealment of the consciousness within the mask of flesh.”

But mostly, this is a gloomy read in which the author calls himself a “fraud and a sham” and dismisses his journal as “this trite, this nonsensical pandering.” While the negativity makes the narrator relatable and his observations sometimes possess universal appeal, most of the book falls somewhere between unconnected snippets and passages—or whole stories—that should have been cut during the editing process.

A perfect example is the opening short story, in which an ascetic and a child rapist have a conversation that includes detailed explanations of how children are abused, cooked, and then eaten by the abusers. Despite the serious themes being discussed, the descriptions add nothing of value to the discussion and merely introduce cannibalism into the narrative, which Balor later calls “Yummy.”

Balor’s three books, taken as a whole, might work as an interesting literary project presenting the unfiltered life of a writer. But by itself, Outbursts of a Pretentious Hypocrite is too long, dreary, and often aimless, which dilutes the interesting passages and keen observations presented, resulting in an unsatisfying read overall.