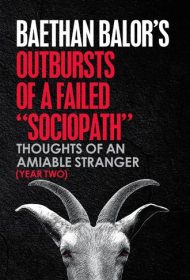 This engaging memoir comprises one year of Baethan Balor’s journal entries, beginning on his 26th birthday. It follows Balor’s first book, a journal of his previous year in some unnamed American suburb. Here, again, he exhibits the quietly urgent voice of a loner with mental illness.

Balor is weary of human interaction and seeks to detach from his ego and from humanity, so he seldom speaks. He knows he’s an oddball—a black-clad, ascetic, minimum wage worker who quotes Tennyson, ruminates on the nature of reality and writes constantly—yet believes people are drawn to him because he appears attractive and intelligent. He writes about his interactions with co-workers, older women who hit on him, and other acquaintances with snappy dialogue, insight and humor.

But the focus of his journals is his internal life. With often-amused detachment, he reflects in easy-to-digest passages about human behavior and the meaning of existence. He frequently describes hearing co-workers or neighbors complain about him, then writes matter-of-factly that he is hallucinating again. He accepts that he is mad, but rejects the “sociopath” diagnosis an unnamed doctor made, and notes that he’s not treating himself for mental illness.

It’s thrilling to read a disciplined, erudite writer who flouts social norms and creates a vivid sense of place through distinctive, disjointed journal entries. But there are disturbing flashes of a dark side, as when fictional characters in his occasional short stories (stand-ins for himself?) engage in violence and torture. Readers are also left with questions about specifics, such as his education and never-mentioned mother, as well as his overall truthfulness.

Balor calls himself “a practiced loon” who is intelligent enough to know he’s an idiot. “I’m no ‘sociopath’, he writes, noting that he only behaves as one to “manipulate my interactions.” How much of this memoir is factual and how much affectation? The only thing for certain is that this talented author provides an intriguing journey, however you answer the question.