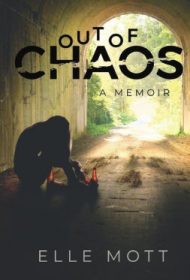 A woman shares her decades-long struggle to overcome the negative choices that led her to homelessness and crime in this powerfully honest memoir.

Elle Mott, now in her early 50s, went by her birth name of Kimberly in her early years during the 1970s in northwest Oregon. Her caring great-grandmother was the predominant influence in her young life and encouraged the child to make good choices, despite an absentee father and an erratic mother.

Nevertheless, as a teenager Elle rebelled, leaving home at age 16, dallying with unscrupulous men, taking up smoking and heavy drinking and soon engaging in petty criminal behavior that led to more serious infractions: home burglaries netting huge amounts of cash and goods. Before long, those illegal activities landed her in prison. The memoir details those activities, life on the inside, and her dedicated efforts to become a contributing member of society at long last.

The story is predominantly told chronologically. It is couched in clear, spare prose with well-crafted, believable dialogue. While the narrative offers enough detail to allow readers to envision the story’s characters and scenes, it isn’t dense with original descriptions. Still, moments stand out: When sent to “the big house,” Mott recalls “towers resembling rooks in a chess game.” Elsewhere, when she finally sees the Atlantic, she describes it with this nice turn of phrase:  “Ocean waves rolled with clapping echoes.”

Overall, a broad range of readers will relate to and perhaps gain insight from Mott’s sincere and  deep reflection on complicated family and relationship dynamics. And they’ll surely be inspired by the effort she displayed to regain control of a life badly derailed.