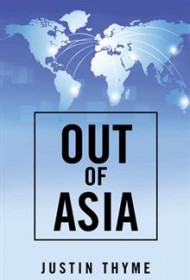 Out of Asia offers alternative explanations of human evolution and the development of different races and is most notable for its individualistic and highly debatable viewpoint.

Accepting the basic Darwinian theory of evolution (not creationism), author Justin Thyme builds the case that pale-skinned, slender Neolithic/Neanderthal/Cro Magnon “organisms” gradually came to dominate the human family, possibly because of their larger brain size. He describes these “Westerners” as “the most gentle” people, who understand science and learn from their mistakes, in contrast to “ethnic people.” He dismisses “North American Red Indians” for example, as having no interest in carpentry, but only in weapons, “mirrors and bowler hats.” Modern Asians, he asserts, score higher on IQ tests only when compared to lower class people of other races among whom they typically reside. He projects that the human race is likely to become “a universal Third World state, as Western people interbreed and are out bred by people of the Third World.”

Although utilizing the standard terminology of the disciplines he surveys, Thyme’s personal slant is unabashedly expressed throughout this work. While his observations across a broad spectrum of anthropology, sociology and politics show reasonable efforts at research, his conclusions often demonstrate faulty reasoning, and many readers will decry his clear bias against non-whites, illustrated by this trivialization of the virulence of racial epithets: “The reason why I do not call black people niggers, wogs, coons, etc., is because I do not like to be called ‘baldy.’”

Even sympathetic readers may be stymied by clumsy phrasing and spelling errors that mar the book’s narrative; for example, “to some [sic] it all up”; “to reiterate again what I have already said”; “countries with a certain racial balance do not do so well economical.”

In Out of Asia, Thyme takes on a multitude of significant issues, offering a distinctly personal perspective — one that is likely to be acceptable only to a limited audience of like-minded readers.