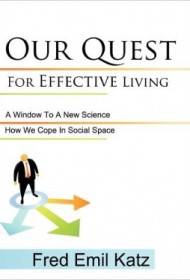 Fred Emil Katz was smuggled out of Germany via the kindertransport at the beginning of WWII. His parents and brother, however, did not survive the Holocaust, and it’s Katz’s first-hand knowledge of the Nazi atrocities and the fragility of life that have led, in part, to the theories set forth in Our Quest for Effective Living. While Katz doesn’t claim that insights derived from his theories will prevent future holocausts, he does suggest they may be used as stepping stones toward a more ethically responsible future.

Each individual, according to Katz, has both an exterior persona and a hidden substrata that influences his decisions and actions. This substrata is composed of psychically charged impressions derived from the individual’s own experiences and from the accumulation of residue from the historical and social factors to which he is exposed.

Katz posits four types or “paths” of substrata. The individual’s connection to one of these, coupled with a referential link to something meaningful within society’s larger context, determines his response to the moral dilemmas that confront him. For instance, during the My Lai Massacre, American soldiers were capable of murdering Vietnamese civilians because the Americans were operating in a “Closed World” path, which included accumulated anger at the Vietnamese and approbation among themselves for “innovative killing techniques.” The referential link here would be the Defense Department’s equation of success in the war with the rising Vietnamese body count.

While sociologists may find Katz’s analytic constructs helpful, lay readers may feel they are unnecessarily abstract, as when Katz describes noted Holocaust survivor Viktor Frankl’s mental escapism in Auschwitz as links from Frankl’s previous life imprinting on his external reality. Katz’s partial reliance on the Milgram obedience experiment is also problematic, as Milgram’s result has, since Katz’s book was published, been called into question.

Nevertheless, Katz’s monograph represents a serious inquiry into human behavior. With some adjustments, it could become a compelling and important read.