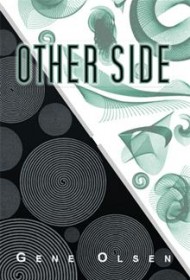 Gene Olsen, systems analyst by day, delves into the stacks of fantasy fiction for inspiration in this imaginative adventure about men wrenched from their universe into a world of warlocks and elves.

Just a page after we meet Logan – not coincidentally, a systems analyst – the protagonist is transported to another world where he finds himself imprisoned by the Gray wizards, a powerful, goblin-like race that’s transporting people from our universe seeking a weapon to use against its enemies, the White wizards, also known as the Elf.

Logan and several other captives – including an Army Ranger, a physics professor and a forest ranger – escape the Gray wizards and join the Elf, where Logan falls for Lethiel, the Elven princess whose affections are forbidden because he’s a human. To help their allies, Logan’s band sets out to retrieve a powerful sword from the “Grays.” Along the way, they meet the Others, a mixed-race pacifist group who want to unify the land. They also discover that not only is their new home more chemically active – a single match can explode like a hand grenade – but each visitor experiences a dramatic gene shift that brings new abilities and appearances. For Logan, this means evolving into an Elf while our heroes face a final battle that is straight out of Tolkien.

Though rather slim, the novel’s plot compares favorably with Lloyd Alexander’s high-fantasy series The Chronicles of Prydain and J.E. Pournelle’s military sci-fi series Janissaries. The writing, however, can be stiff and laborious, especially the expository dialogue, which often doesn’t use contractions. In one scene Logan meets Sully, who was a forest ranger in their home world; Logan surmises that as a forest ranger he probably was in great shape. “Sorry but I am not,” Sully replies.

Such issues aside, the rich setting, cinematic set pieces and heroic arc are likely to hold strong appeal for adolescents and avowed fantasy readers.