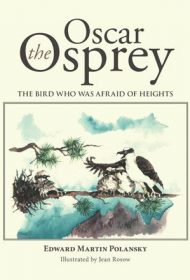 A bird with acrophobia finds ingenious ways to survive in the children’s picture book Oscar the Osprey.

When Oscar tries to fly, he faints, causing consternation among his family members and, later, criticism from his community. Eventually, Oscar is able to fly, but only at a very low altitude, and out of necessity he develops unique fishing skills that leave his fellow ospreys mostly baffled or dismissive.

When winter comes, Oscar remains behind, unable to fly over the high mountains with the rest of the flock. Finally, pressed by a life-threatening situation, he takes flight, learning to adjust and fly toward warmer weather, survival, and a sense of peace and happiness.

The book’s first-person narration makes it easy to relate to Oscar, a smart, hardworking hero who battles a disability he doesn’t completely understand. His efforts to do his best within his capabilities are inspiring. Fun, clever writing adds to the enjoyment, as does a delightful backstory about the naming of Oscar and his siblings. (However, it’s confusing when Oscar explains that “My sister, Oprah, was named after the fawn [..]” and “My brother was named Otto after the majestic mountains surrounding the lake[..]” There’s no mention that Oprah has a biblical meaning of “fawn,” leaving readers waiting for a specific fawn named Oprah to be introduced. Meanwhile, an Internet search finds only one “Otto Mountain,” in California, while the story is set in Grand Teton National Park, Wyoming.)

The pen and ink illustrations are superb, as is the full-color cover image. The artwork carries a sense of action and vitality that does justice to the book’s natural world setting.

The book is text-heavy and too advanced for beginning readers. But proficient younger readers—or children being read to by an adult who can explain some of the unfamiliar vocabulary—will enjoy the story. Despite the minor lapse mentioned, Oscar the Osprey is a wonderful read, both entertaining and impactful.