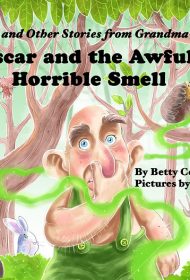 Betty Cetas’ children’s book, Oscar and the Awful, Horrible Smell follows the adventures of Oscar the troll as he searches for an odor that grows increasingly horrible throughout his investigation.

Oscar the troll is an intrepid denizen of his forest home, as comfortable with a fresh daisy or a fruity blueberry bush as he is with the forest creatures. But one day he detects an awful smell. As he walks through the forest to investigate, he wonders: Is it him? He sniffs his arm pit. Nasty, but not what he’s after. He crouches on the ground, level with fresh mushrooms in the soggy earth wriggling with worms. Is it this? Nope, it’s bad but not as nasty as the smell Oscar is after.

He finds a dead fish in the back of the wolverine’s den. When the wolverine flashes its teeth, he leaves and continues to search, finding among other things an egg yolk spilled on the ground and moose droppings he must inspect. He kicks away the “horrible, rotten, putrid, terrible, nasty, stinky” droppings, but even they aren’t as bad as what he smells. It’s only once he’s home in his cave that he must face the amusing truth.

Children will find Oscar’s encounters with each terrible smell hilarious, while learning new words by repetition at the same time (the author uses the phrase “horrible, rotten, putrid, terrible, nasty, stinky smell” with each new smelly encounter). The illustrations are bright and cheerful, and Oscar is relatable, a chubby, pink, wide-eyed innocent who gets into trouble without meaning to.