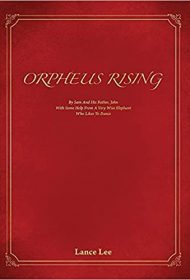 Lance Lee’s fairytale—essentially a whimsical reimagining of the Orphic myth—follows 10-year-old Sam and his father into an imaginary otherworld where they attempt to locate and save Sam’s beloved, deceased mother.

Sam lives with his father in the countryside, where—when he’s not being homeschooled—he’s kept busy doing chores, including milking the cow, collecting eggs from the chickens, and managing the garden. As busy as he is, Sam’s life is empty. His writer father John is mired in a soul-crushing depression (living a “gray existence”), and whenever Sam asks where his mother is, John won’t give him an answer.

When a mysterious blank book arrives in the mail and Sam draws in it, his drawings inexplicably become reality, and Sam and his father, with the help of a dancing elephant dressed in an Edwardian suit and matching vest, set out on an epic quest to bring his mother back from beyond the grave.

His mother is in a hellish place called Dread City; to get there, the unlikely trio must survive numerous challenges, such as crossing a nightmarish sea of faces and escaping marauding centaurs.

The story’s lyrical writing style and surreal nature make for an effortlessly page-turning read, although a few sequences run too long. The lessons the characters learn during the journey are also noteworthy, as father and son come to understand the healing capacity of honesty and trust, and embrace their own inner strengths.

Although tonally comparable to Frank. L. Baum’s classic The Wonderful Wizard of Oz, the raw emotional intensity and thematic force is the story’s real power. “A life lived without love,” says Sam’s father, “without even the desire for love, is a life without meaning.”

This is an action-packed, heartfelt romp through a young boy’s imagination, complemented with striking illustrations. Think of it as L. Frank Baum falling down Lewis Carroll’s rabbit hole into the afterlife. It’s sure to entertain readers of all ages.