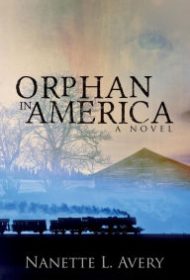 Not knowing what to do with abandoned, orphaned or neglected children during the Industrial Revolution, America’s good hearts bundled the young boys and girls onto “orphan trains” headed west and into the arms of pioneers who raised them as needed extra hands down on the farm.

Nanette L. Avery breathes life into this “enlightened” practice during the 1800s by following the dreams, bafflements and torments of Alex, who as a boy of five was torn from the arms of his struggling father in the slums of New York and shipped to a stern and childless farm couple scratching out a subsistence living in Missouri. In this deftly presented historical novel, Alex’s rugged life is painstakingly and strikingly sketched.

Avery’s drama is both enthralling and handsomely penned. The finely drawn heroes and villains who cross Alex’s path to maturity reflect the colorful, authentic and vivid characterizations that made the stories of Charles Dickens’ stories so memorable. There is the cackling, cantankerous and ancient Mrs. Cambridge, the conniving Jack Philander, the mysterious Pinto Jack, and the “stout butcher, Mr. Bumble.”  Henry, the barnyard rooster, is the “custodian of the dawn.”

In Avery’s hands, the fat in a red-hot skillet sizzles “like an angry snake locked in a box” and the frigid air “bristles and snaps like a dog baring its teeth.” Alex discovers not just a rushing river, but also one whose waters talk in “babble…a language so quick that a human’s ears can only decipher it as a charge or flood of movement.”

Here is an artful rendition of the frailties, tragedies, tenacity, innocence and heroism of the Americans whose westward movement, whether or not by choice, defined a nation. It is highly recommended not just for fans of historical novels, but also for any reader who enjoys a skillfully executed tale.