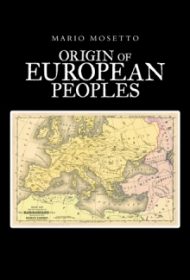 In his Origin of European Peoples, Mario Mosetto uses historical linguistics to trace the migration of early Indo-European groups and to show how similarities between certain key words in disparate languages may indicate a connection between their peoples.

Because languages necessarily evolve through time, Mosetto bases his research on the comparison of “symbolic key terms” which, he postulates, remain “unaltered because of their symbolic strength.”  Words like those denoting gods, rivers, mountains and place names, he claims, are unlikely to change due to their “particularly high value within each language.”

Using an impressive array of sources, including texts from Herodotus, Aelianus, Caesar, the Bible, the Iliad, and the Aeneid, Mosetto strives to demonstrate theories such as the “Aegean origin of part of the Irish people” and the Estonian origin of the Saxons and Frisians. The book’s subject matter is comprehensive, ranging from times circa Ramses III to the medieval legends of King Arthur.

Mosetto’s book is written in brief sections, rather than with an overarching narrative. At more than 700 pages, this makes for a daunting read. For example, in a chapter titled “The name Europe, the name of the cultivable land and of the water,” he discusses, in individual sections, origins of the words for mother, mother earth, cow, the adjective “ibern,” the First woman Ewa and the name for the South American anaconda—among others. Within each section, the prose often degenerates into lists of word origins. For example, he notes that anaconda “is found in Japanese to indicate the sea eel anako and in Hebrew nachash=snake, moreover in Hebrew ‘anaki is the giant.”

To make matters more challenging, his writing can be puzzling: “It’s essential what the Bible says, just that the years’ calculation is very anticipated; the spreading of mankind might have moved forward on the mainland.”

This is clearly a work of passion, but its comprehensiveness is also its weakness, as readers will feel awash in a sea of detail with little connective thread. An editor with strong organizational skills is required to make this book approachable.