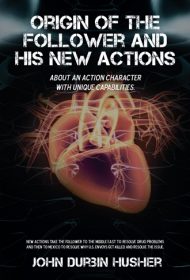 Growing up, Axel realizes that his body is capable of producing much larger than normal quantities of energy. Axel sets about developing a mini-computer to implant in himself, which, powered by this surplus energy, will allow him to speak multiple languages and perform feats of immense strength.

Meanwhile, Axel’s brother, Adam, works for USAA, “a special agency located in the Pentagon,” and assists Axel with his project. In return, Axel helps the agency carry out its missions around the world. As The Follower, Axel battles drug runners in Pakistan, rescues a ship from pirates in the Indian Ocean, and investigates the murders of U.S. envoys in Mexico.

Superhero stories are intrinsically appealing, and Husher shows occasional welcome flashes of humor: When Axel faces an attempted robbery after stopping at a candy store, he wonders, tongue in cheek, whether the thieves are interested in his money or his candy. His chapter titles are also frequently amusing, including “The Road to Karachi – Not Fun” and “Chemistry in Karachi—Morphine or Heroin.”

However, Origin of the Follower and His New Actions suffers from fundamental flaws that limit its appeal. The Follower’s invincibility is so extreme that readers are never in suspense over the outcomes of his missions. Additionally, the narrative style is stilted: for instance, pondering his recent marriage, Axel thinks to himself: “I have a great education and an educated wife to hopefully live my life out. We seem to be quite compatible. . . I know when things are under pressure, and I try to defuse it by sitting back and thinking about her position, and then [sic] I am happy to agree with her.” Long paragraphs of exposition compromise the story’s momentum.

The novel’s premise is inherently intriguing, but Origin of the Follower needs substantial editing before it will appeal to a general audience.