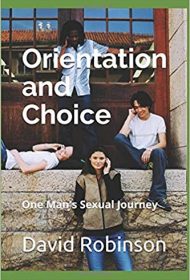 In Orientation and Choice: One Man’s Sexual Journey, David Robinson examines his decision to eschew his homosexual desires for a heterosexual lifestyle.

Early in his teens, in the late ‘60s, Robinson was troubled by what he describes as homosexual urges. He was attracted to muscular classmates to the point of becoming sexually aroused in a locker room setting. Despite his homosexual impulses, Robinson wanted heterosexual relationships and never engaged in a homosexual liaison. He spent the last half-century pursuing and dating women, and eventually married, embarking on a 15-year union that he says is complete and satisfying.

In these pages, Robinson re-examines that choice and wonders: Could today’s youth follow his path, or would they be coerced by psychologists, therapists and others to embrace homosexuality?

Robinson feels the latter is most likely, and proffers several highly provocative ideas. In one passage, he writes that he believes the LGBTQ community opposes conversion therapy because its members want to increase LGBTQ numbers in society. In another, he equates homosexuality with habits such as smoking. “I regard homosexual temptations the way I regard any mildly negative temptations such as overeating and other little vices,” he writes.

The author doesn’t force his opinions on readers. In fact, he often undermines his own arguments with caveats such as “I’m not a psychologist, but . . .” or “Read this chapter for what it’s worth, which may be little or nothing.”  He could afford to be more forceful.

Mechanically, the book also presents some issues. The narrative slips between present and past tense, and the author excessively repeats something he was told as a teenager: that a man’s penis is designed to fit a woman’s vagina. Overall, the book requires editing to polish the prose and eliminate repetition.

Robinson shows courage in writing a book that challenges mainstream thought. His ideas are decidedly controversial, but readers looking for a different viewpoint on the topic may find some value here.