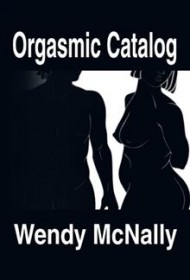 In Orgasmic Catalog, author Wendy McNally weaves a fictional story of awakening, love, loss and renewal into a highly unusual feast that includes recipes, illustrations and poetry. The story follows main character Helena’s sexual awakening and relationship with Napoleon. They’re destined for one another, but a series of events compromises their love.

This is erotica, but not in any conventional sense of the genre: There is sex, but the story’s real currency is sensual appeal, and the book’s structure is unique. Short chapters are followed by poems, illustrations and recipes. While the connections between the chapters and these additions aren’t obvious, they form an interesting matrix.

Chapter 3, for example, describes Helena and Napoleon’s first meeting and a sexual encounter between them. This is followed by an illustration of a nude man and woman and another of a toddler running against a background of tropical birds. A poem titled “Island Guest” then ties together themes of youth, aging, and the animal world. Finally, there are two recipes for the same luncheon: a fancy open-faced sandwich garnished with nasturtium blossoms. Is it a jumble? Perhaps. Still, it somehow makes sense on the sensory level.

The last half of the book adds a fourth ingredient to the chapter/poem/recipe structure, including excerpts from a novel written by Helena. While it all has the potential to be confusing, McNally writes with a sense of vision for the whole. Far more than plot or characters, this is a work based in style. That said, this is not a book for everyone; some readers may be put off by the format, as well as the language, which is occasionally overstuffed (Helena’s “salacious yearnings for victuals” are just a fancy way of being hungry, after all).

Still, Orgasmic Catalog is unlike most books — and therein lies its strength. This is a strange, sexy culinary adventure and an utterly unique story of enduring love.