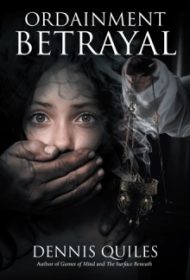 Ordainment Betrayal, by Dennis Quiles, is a fast-paced, melodramatic, thriller.

Private investigator Jack Steele is drawn into a fight against human traffickers when his fiancé dies defending a boy fleeing his captors. This Albanian criminal ring, known as The Outfit, serves extremely wealthy and depraved clients, which include a Catholic priest who abuses and murders children, assuaging his guilt by providing “angels” for heaven.

After the murder, Steele is determined to destroy The Outfit practically single-handedly, although he does have the sometimes-support of a Chicago police detective. It’s an apt battle as Steele is as ruthless as the men he’s hunting.

The caricatured action in the book is non-stop, violent, and reminiscent of comic book exploits. For example, Steele engages in a shootout with an undisclosed number of “thugs” that finishes with him tossing Molotov cocktails made with liquor bottles. When captured, though naked and hanging on a meat hook from the rope laced around his hands, he again takes on his assailants, first by literally tearing out the leader’s throat with his teeth, breaking another’s neck with his legs, and biting though the rope on his wrists; then, when the remaining thugs finally attack, by disarming them and escaping. He throws knives through eyes and into foreheads. He kills his targets even when shooting blindly through doors.

The writing is similarly overstated. Steele’s fiancé, with “wavy red hair, flashing blue eyes, impish smile…athletic figure…never-ending flirtatious laughter,” says the thug chasing the boy will get him “over my dead body.” Steele describes himself in self-satisfied terms: “I could deal with assassins, crush conspiracies, and even endure torture once in a while.”

The book reads like a Saturday serial of the 1940s. It is for readers who want non-stop gun battles, over-the-top protagonists who perform superhuman acts of physical prowess, and submersion in a violent world where the hero never gets a scratch.