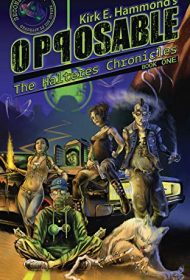 Equal parts drug and alcohol-fueled road novel, bizarro science fiction, and apocalyptic thriller, Kirk E. Hammond’s first installment of his Halteres Chronicles follows a misfit group—including a writer whose ideas may be thought spores from an omniscient alien fungus, a telepathic cat with bionic hands, and a sexy assassin—as they try to stop an alien invasion and save the world.

The surreal, LSD-like quality of the narrative is intense and consistent from the beginning. The narrator, a writer nicknamed Pops, and his 120-pound mutant feline friend Patton, are holed up in a cabin in the Rockies when an extraterrestrial larvae attacks them. Pops, near death after being accidentally torn open by Patton’s razor-sharp claws during the attack, is saved with the help of Ashleigh, a badass with a seemingly endless supply of money and weapons, and Xeno, a “punker, resigned nihilist, career partier, dabbler in alchemy, and master of pharma.” With aliens and other assorted monstrosities hot on their tail for myriad reasons, the group loads up on drugs, alcohol, and weapons, and takes off in a custom-retrofitted Dodge Challenger Hellcat X.

The story is replete with creative characters. A telepathic cat, alien slugs, various UFOs, space portals, zombie cops, and even exploding strippers—all could have been birthed from a story that Pops wrote about a conjoined binary terrestrial system known as Halteres.

One secondary character is described as “utterly extraneous,” and that’s a fitting description for much of this storyline. The narrative is like a literary drug trip: It’s ultimately about the experience, not so much the rationality and coherency of it all. Breakneck-paced, action-packed, and highly entertaining, this novel isn’t for everyone, but those who enjoy their literary escapism with a touch of WTF will enjoy this science fiction romp immensely.

Consider it the literary equivalent of Jack Kerouac, Hunter S. Thompson, and Douglas Adams, all dropping acid during a pulp horror convention.