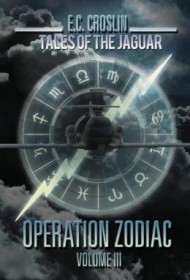 With a background in law enforcement, a “love for adventure and friction [sic] writing” and admiration for authors such as “Tom Clancy, Ian F1amming [sic], and Gene Rodenberry [sic],” E.C. Croslin was inspired to write Operation Zodiac, the third volume in his “Tales of The Jaguar” spy series. This book again features secret agent James Barn, a.k.a. John Ricardo Fernandez or The Jaguar.

After two particularly violent missions, James is removed from active duty when his employer, the National Security Agency, suspects he has a “personal venditor” [sic] (“vendetta) and launches an investigation. After much grumbling, he gets re-assigned to a new mission: looking into the murder of Zeus (code name for the creator of Zodiac, a “super sonic [sic] semi space craft”) and its crew of top pilots that mysteriously disappeared. James is warned of the complexity of this mission, known as Operation Zodiac.

A young CIA agent and older British agent join him in a massive effort to avert World War III, planned by a rogue agent and foreign assassin. Through physical combat, mental agility, romantic encounters, and a team effort, secret agent “Barn, James Barn” works to save the world from total destruction.

While the author deserves credit for his enthusiasm in producing the third in this voluminous series, the book suffers deeply from mechanical errors, such as improper subject-verb agreement, run-on sentences, tense shifts, incorrect word usage (e.g., multiple uses of “pass” instead of “past”), nonstandard English (e.g., multiple uses of “willn’t”) and so on. These issues create a challenging, confusing read.

In addition, the derivative main character (clearly modeled after James Bond), overly familiar storyline, and unnecessary wordiness could use tweaking to help this series stand out among other spy novels.

In sum, the book is in need of an editor’s guidance before it can appeal to even the most ardent spy thriller fan.