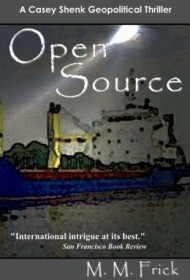 M.M. Frick, an active duty Naval officer who has traveled the world’s geo-political landscape, has written an enjoyable thriller from an unconventional perspective. The main characters are a vending machine stocker in Savannah, Ga. — a self-described “nobody” — and a sharp intelligence analyst working for a high-powered consulting firm in New York City.

The two cross paths when Casey Shenk, the vending stocker everyman who mulls over international political puzzles on his blog as a hobby, writes about a hijacked Russian ship in the Baltic Sea. The ship turns out to have stolen missiles on board — something Susan Williams, the analyst, is investigating but that Shenk has already figured out.

Williams contacts Shenk because of his uncannily accurate assumptions, arrived at just by using “open sources” on the Web. While Shenk’s blog brings the two together, it also attracts the attention of someone from St. Petersburg, Russia, who posts a threat on Shenk’s blog to back off.

Although the book starts off a little slow — Frick did a lot of research on how a vending machine deliveryman does his job, and proves it by inserting a lot of details — it picks up steam several chapters in, and halfway through the book, the reader can visualize Open Source as a taut thriller on a movie screen.

The story tumbles along, making smart connections along the way, inviting the reader to think like the blogger, Shenk. The plot puts together pieces of the international puzzle — Russian missiles, rogue Iranian military leaders, Israeli machinations and an outlying plotline about a lone Arab man’s need for revenge — until they fit perfectly in a breathless conclusion.