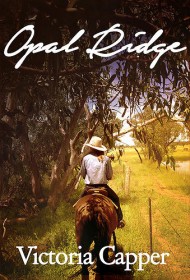 In this simple, traditional romance, handsome, charming Charles Carmody and the equally dashing Jenna Mackenzie are smitten with each other from first glance.

Charles owns a huge cattle station in the Australian outback and is also a successful city businessman; Jenna is a sweet-natured country girl who arrives for work at his farm. However, after finding his latest love in bed with another man, and painfully aware of how his father suffered during a second marriage to a conniving gold-digger, Charles wants nothing more to do with women.

So while he and Jenna are hopelessly in love, he is wary about showing his true feelings and continues to doubt her sincerity. A series of misunderstandings, several of which involve Charles arriving just as the innocent Jenna appears to be flirting with other men, add to his nagging uncertainty.

Unfortunately, these situations feel extremely contrived, and it’s hard to believe Charles, even with his emotional scars, would react as angrily and irrationally as he does. The same lack of believability extends to much of the book’s narrative and its cast of thinly drawn characters. The book is replete with stereotypes  — for example, faithful old farmhand Bill-Bob, a taciturn man who harbors a deep family secret; starchy librarian Ethel Alsop; and Porsche-driving hunk Tony— and weighed down by its predictability.

Opal Ridge is also remarkably chaste. Apart from a few incendiary kisses, there’s no sex. Mentions of desire, often overwrought, suffice. For example, a glance at Charles makes Jenna “feel her pulse race and her body almost turn liquid. Goodness, what an effect this man could have upon her!”

Despite these shortcomings, readers outside of Australia may be charmed by the slightly exotic setting of the Australian outback. They will learn a few new words and phrases, something about koala bears and other wildlife, and gain insight into the management of a massive sheep and cattle station.