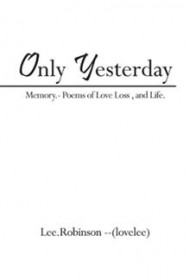 From his poetry, it’s clear that Lee.Robinson has lived a life of adventure, delight, sorrow and irony. Born in South Wales in 1923, Lee.Robinson (the name the author goes by on his book cover) served in World War II, worked as an engineer and consultant, and traveled the world, including India, Africa and Australia. Despite some choices typical of the novitiate, his poetry demonstrates an intuitive feel for the soul of the craft. His gift for clear, gentle music, often trumps lack of finesse. He rarely seeks refuge in rhyme, and appreciates the advantage of detail, though he could exploit this quality further.

Consider this passage from “Sarn Helen” : “Across blind shrouded uplands/ Barren soil, needle grass, heather bog…” Nice, but it might enhance Robinson’s poetry to wed such details to sensation, say, the texture of barren soil, the aroma of heather.

Similarly, in “Where It began,” he confides an early sexual encounter : “….Until all that I had seen in books, paintings, was revealed as true…” Robinson is comparing information to experience, but why the missed opportunity for particulars? Which book? What painting? You can’t help but admire Robinson’s authenticity and clarity, but he occasionally depends excessively on explanation and anecdote, rather than solid, evocative imagery, such as metaphor. Pieces like “Where it began” and “Yes Headmaster,” while undeniably effective, feel more like rich journalism or memoir than poetry.

Only Yesterday is an impressive collection packed with engrossing, poignant, compelling reflections on caste, warfare, inhumanity and grief. Robinson swiftly reaches the core of his content, supported by vivid illustration, though his work lacks some of the subtler devices of poetry, such as distillation, flow and resonance.