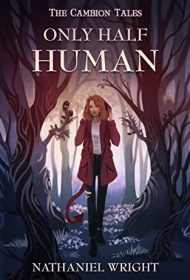 In Nathaniel Wright’s YA debut, 15-year-old Lesley Robinson joins a community of magical creatures after a physical transformation reveals her formerly unknown heritage.

Lesley lies down one day feeling sick and wakes up with wings, horns, and a tail, forcing her mother Jane to admit that her father is a demon and that Jane herself is a witch who has been hiding magic from Lesley for her entire life. The two immediately move to Misty Hollow, a hidden community for magical creatures, where Jane hopes Lesley will be safe.

Unfortunately, Lesley is almost instantly targeted by bullies as she discovers that the magical community is divided into dark and light “fae” (a term for everything from elves and satyrs to vampires and witches), and that as a half-demon or “cambion,” Lesley isn’t welcomed by the favored light fae.

Worse, a demon prince sends Lesley’s long-absent father to teach her just enough magic to tempt her into agreeing to serve the prince in order to learn more. The bullying pushes Lesley to use her new power to punish her tormentors, although most of her new friends urge moderation.

While the story holds promise, it suffers from several flaws. The writing is inconsistent, with characters sometimes behaving like high school students and sometimes much younger. Also, the school doesn’t seem like a “magic school.” It’s mostly portrayed as ordinary, except for one information-dump scene where a teacher gives a kindergarten-level lesson on the history of dark and light fae to a group of sophomores.

Additionally, the author never explains why the bullying is so intense and focused on Lesley. And the dark/light fae dynamic comes across as a weak allegory for racism that’s never thoughtfully examined, focusing only on obvious ways that “light” people are treated more positively than “dark” ones, while playing into, rather than subverting, stereotypes.

With its somewhat basic writing and shallow story, the novel is likely to have limited appeal for its target audience.