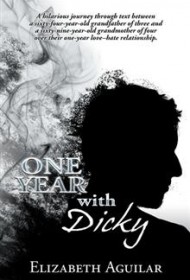 Elizabeth Aguilar’s, One Year with Dicky, tells the tale of the turbulent first year of an unlikely friendship between two seniors. It’s unclear whether it is meant as a novel or memoir: While it reads like fiction, the protagonist and author’s names are the same (Elizabeth/Lizzie), suggesting that it could be a recounting of the author’s personal reminiscences.

The book cover promises a “hilarious journey” through a “love-hate relationship.” Lizzie, 69, is highly conservative and not looking for love. When her friend Selena introduces her to Dicky, 64 — a man with a lust for life and sensuous women, she is at first repulsed by his vulgarity and manner. Yet something draws her to him, and over the ensuing year, the two form a friendship that’s as unconventional as their conversations, which swing from religious jargon to lewdness.

Although Dicky is quick to admit an attraction to Lizzie, she resists his advances and keeps him at a distance, often citing her Christian faith as the reason. She ardently denies that she’s in love with him, yet is constantly jealous, often questioning him about the women she suspects are his lovers. Dicky is lascivious and often cruel in his teasing, bringing her to tears more than once.

The story is structured by date and told in first person, reading like a series of journal entries. Aside from the repeated premise that the protagonists are getting to know one another, there’s no real impetus to the narrative arc, and the relentless recounting of their dates and conversations becomes wearying. Additionally, neither Lizzie nor Dicky is particularly sympathetic.  Lizzie is—as Dicky accuses—possessive and controlling; Dicky is moody and crude without the relief of being genuinely humorous, failing to woo either Lizzie or the reader.

Ultimately, One Year With Dicky isn’t fully successful, either as memoir or fiction. Without a compelling romance or endearing characters to lure in readers, the story is more likely to frustrate rather than satisfy.