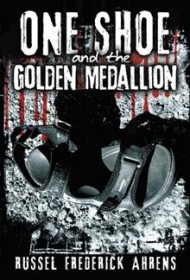 One Shoe and the Golden Medallion is a murder mystery connected to the inner workings and goals of a secret society.

Henry Wainwright, CEO of a large import-export business, wants to create Virtue Warriors, humans transformed by technology to help Third World countries using their supernatural powers. But Wainwright is associated with a series of murders, though it’s not clear whether he’s orchestrating them or trying to prevent them.

The novel begins by describing a series of apparently linked murders, and as a result, the story takes some time to get going. The premise is fantastical and may be difficult to appreciate if the reader goes in expecting a simple murder mystery. There is much discussion of religion and virtue; in fact, it’s as much a religious novel as it is a mystery. While this may attract some readers, it may turn off others if they aren’t aware of it beforehand.

The book is filled to the brim with vivid descriptions and details. From Yellowstone National Park to Pequot history and culture, author Russel Frederick Ahrens clearly packed the book with information about his personal interests. That’s great for readers who share his enthusiasm for these subjects, but for those who don’t, the sometimes-overwhelming detail can be cumbersome.

The writing is sure-handed and generally easy to read, though dialogue such as “It’s important that I preface your reading of this secret information” can be unrealistic. Ahrens’ character development is surprisingly good; he does a great job of making sure the reader gets to know even the minor figures.

While the appeal of One Shoe and the Golden Medallion may not be overly broad, readers who enjoy religious-themed adventures will likely enjoy it.