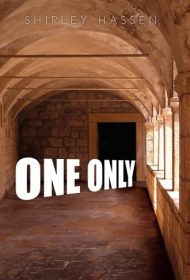 One Only tells what happens when an ancient ruler creates an untenable law out of spite.

The story begins in 1013 in the fictional bucolic land of Borrick where King Mantor discovers his beloved queen, Bernice, has been unfaithful. To punish her, Mantor condemns three of his own four children to death, sparing one prince and declaring that henceforth there shall just be a single child in each family – one only.

The author then commences a story of kingly succession beginning with Mantor’s surviving son Bruce, who, after having been imprisoned until age 16 as further punishment to the queen, executes his father upon his release and gains the throne, yet perpetuates the sadistic custom of one child only. Eventually, the narrative arrives with King David’s ascent to the throne in 1220.

King David is more benevolent, yet the rule of One Only remains in place. When he’s sabotaged and left for dead by the power-hungry governor, his queen’s maid helps her hide two of the triplets she bears just after David’s sabotage in order to save their lives.

The story crescendos when young princess Angelica and her friend Erma meet the intriguing Pierre who bears a striking resemblance to both of them, and the trio embark on a quest to help a man they are convinced is the long-lost King David regain the throne.

This story piques interest but suffers from several flaws. The plot is replete with contrivances and writing issues. Characters and places change names (Angelica/Angeline, Borrick/Dorrick), sometimes within several paragraphs, and misspellings confuse (a lover’s “Trieste” vs. “tryst”; “bowls” of the dungeons vs. “bowels”). Also, the over-abundance of characters is hard to follow. Most early characters appear only once, and readers are unsure if they need to be remembered. Yet almost every character in the King David era has a critical part in the story.

Such issues make the reading experience challenging. Despite a promising conceit, the story requires revision to appeal to a wide audience.