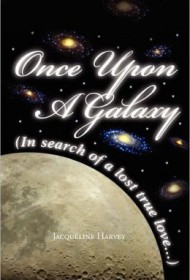 Once Upon a Galaxy, a metaphysical memoir that journeys around the world, to another galaxy and a past life, follows lovers Yvette and Juan, two souls separated from the same source and destined to be each others’ true love for eternity — even when they don’t know it.

While Once Upon a Galaxy reads like a novel, the author notes that this is a true story: “my fairy-tale as close to the truth as can be told.” Seen through Yvette’s eyes (presumably Yvette is Jacqueline Harvey), she has lived at least 11 other lifetimes, all in search of her true love, Juan. Yvette travels around the world following the presently incarnated Juan, who is a famous singer on tour. The more Yvette explores, the more she remembers who she and Juan are, and she begins to travel to her origins in the galaxy, a place called Abbadextria, and to a past life that holds key clues. Yvette meets spiritual teachers who assist her in fulfilling her destiny.

Harvey’s memoir recalls mind-bending, time-traveling books such as Paolo Coelho’s Brida, Shirley MacLaine’s Out on a Limb, James Redfield’s The Celestine Prophecy, and even a little pinch of Antoine de Saint-Exupéry’s The Little Prince.

Even though the French-Canadian Harvey claims English is her second language, the prose is nearly flawless, outside of the overuse of “‘cause” for “because” and “till” for “until.” At times, however, the story’s flow is weighed down with too much extraneous information, mostly when traveling with Yvette on tour, where it can feel as if reading an unedited journal with notes about booking hotels and looking for restaurants. Also, sometimes the shift between lives and dimensions is hard to follow and could be easily remedied with a consistent format that signals shifts from Earth to Abbadextria to past lives.

Still, Harvey has woven an emotionally compelling and engaging metaphysical story that will appeal to readers who are open to such paths of thought.