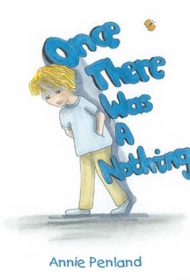 In this emotional picture book about loneliness, an outcast finds the joy of friendship.

Joe is a young boy who feels like “a nothing.” He’s teased at school and often yelled at when home. His circumstances make him feel small and vulnerable and seem to take away his voice, making him quiet and difficult to notice, as well.

One day, he meets a “something” named Angel, who is a bit like a girl, a bit like a mystical creature. She is lonely and sad too. Together, they learn what friendship means. When Angel leaves, Joe is bereft, until he realizes he must treat himself as a friend, too.

He soon meets a “someone”—a boy who reminds Joe of himself before Angel. The two become fast friends and pay it forward yet again as the book concludes and they meet a girl who also seems alone.

The story is written as a rhyming poem, but the rhyming words are often mid-line, rather than at the end, causing some confusion. The rhymes occasionally feel forced and the meter is inconsistent. For example: “The boy soothed little Angel and/ wiped away her tears. He set/ her on her furry feet. He told her,/ ‘There’s no one here to fear.’” Overall, however, the descriptions ring true to the experience of an isolated child and, especially with an adult to guide a conversation, the story may help young readers become more empathetic and aware of how they impact others.

Although somewhat amateurish, this book’s soft, fanciful illustrations generally complement the narrative and help make Joe’s emotions resonate. Young readers can see Joe connect with others, along with learning to value his own company and voice. As he gains confidence, the illustrations of Joe also become less ephemeral, more human, and more colorful.

Despite its rhyming flaws, this is a touching story with a narrator anyone can root for. Many young readers will relate to Once There Was a Nothing.