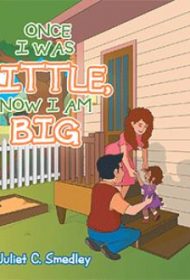 Once I Was Little, Now I Am Big tells the story of a girl reminiscing about how much she’s grown in just a few years.

Josie, the book’s narrator, is a pre-teen remembering the days when she was little older than a toddler. From the back steps that her parents had to help her up (now she can take them two at a time) to a small rocking chair her grandfather built for her (that she can now barely sit in), Josie contrasts her relationships to objects over time.

Meanwhile, she also hangs onto her little-girl habits: She still builds a snow house for her dog after blizzards and tries with mixed success to lie on the back of her inflatable dinosaur, now patched and far from air-tight. Her room appears almost identical over time, except for the addition of a desk and the removal of stuffed animals.

The only sign that she’s getting older, aside from her size, is Josie’s love of spinach, which developed over time. (But she still hates the cooked version, so perhaps not much has changed after all.)

The narrative is straightforward, and the simple, colorful illustrations complement Josie’s story and bring her comparisons to life. Her perspective, however, is one-dimensional: Her examples are narrowly focused on size and fail to capture changes in personality, interests and circumstances. While the consistency can be charming, it lacks the nuance that comes with learning to appreciate new things and new ways of interacting with the world as one matures.

Once I Was Little, Now I Am Big reduces growing up to growing larger and misses a chance to do more. Still, it’s an opportunity for adults to help young readers imagine how they will change as they get older.