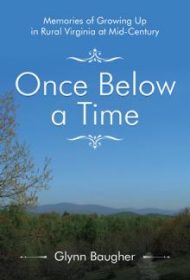 In Once Below a Time, Glynn Baugher recounts growing up in a large, poor family in rural Virginia in the 1940s and ’50s. Underlying these personal details is the rich topography of Greene County, its wooded hills and plentiful streams overlooked by the Blue Ridge Mountains.

Born in 1943, Baugher roots his memoir in rural Celt, Virginia, with its lush vegetation atop tribal hunting grounds that yielded troves of arrowheads. He quotes Kenneth Grahame when recalling the verdant springtimes of his youth: “ ‘its spirit of divine discontent and longing . . ., calling imperiously.’ ” Although Baugher’s family and neighbors were poor, “[C]ountry poverty is not like city poverty; it didn’t bother me.”

He depicts a loving family full of “walking paradoxes . . . loosely gathered bundles of contradictions…,” including his forebears and his four sisters and four brothers. As the youngest, he learned much during family gatherings: “Daddy never was cautious about what big-eared little pitchers might overhear . . . ”

Baugher’s evocative writing imparts a deep sense of place, and a general audience might appreciate the retired college English teacher’s vivid language and frequent literary references. However, his skills illuminate the minutiae of his past—farm chores, family mealtimes, favorite newspaper comics—and could feel too personal for most readers. The entire seventh chapter, for example, features gossipy tidbits about his neighbors. (“Alberta’s one daughter, Carrie, lived in Charlottesville and was married, her husband’s name Sacre (pronounced SAY.cree), but her name to us was always Carrie Coon. I don’t know why other than for the alliteration.” )

Baugher says he began his memoir after realizing how different his children’s upbringing was from his own and that his youthful world “has all but vanished from this earth.” For his family, Baugher’s self-described “little piece of personal history” will endure as a meaningful legacy, although it might be too heavy on insider details to attract a wider readership.