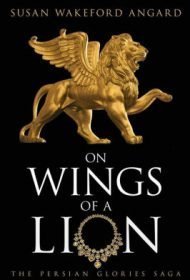 On Wings of a Lion by Susan Wakeford Angard, is a suspense novel set in 1978 Iran against the ensuing political chaos as the shah falls and Islamic extremists take power.

Hollywood film director Kathryn Whitney and her crew are in Iran to film a Super Bowl ad for Boeing, unaware of the deteriorating political situation. They are to meet up with National Geographic photographer, British-Iranian Anthony Evans, but he misses the first few shooting dates. When Evans and Whitney finally meet, it’s as strangers in a hotel lobby. They are unaware of the other’s identity but experience immediate chemistry. To add piquancy to their headlong plunge into an intense affair, they decide not to reveal their names. It’s only after their first sexual encounter that they discover, by asking others, each other’s identity.

Evans also has a secret life smuggling at-risk families out of the country. Unbeknownst to him, his jealous Iranian cousin, Mirdad Ajani, who is involved with the extremists, is betraying Evans.

The book reads quickly, and Angard’s descriptions of a vanished Iran are captivating: “Before them lay an oasis of beauty and repose, fragrant with roses, geraniums, pomegranates, orange trees, and myriad flowers stretching ahead like a magic carpet…this was Technicolor with textures, silky, veined, transparent and vivid.” Action scenes are well conceived and engaging.

By contrast, the dialogue can seem contrived and awkward (“I want my sister’s child gone from this world”) and the story could use more context about this time period in Iran. Also, the author seems uncertain which is her main storyline: the filming of the ad, the political intrigue around Evans, or the romance between Evans and Whitney. This indecision weakens all three and causes the book to end on a weak note, without the heart-pounding chase/escape that suspense fans expect.

Despite its flaws, however, On Wings of a Lion is an entertaining read. It would make a welcome companion on a long plane flight.