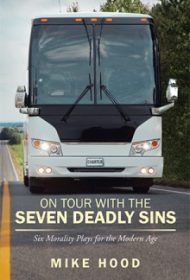 Author Mike Hood’s thumbnail bio mentions his Ph.D. in English and 31 years of teaching literature/medieval literature and “the history of ideas.” This background is undeniably reflected in his On Tour with the Seven Deadly Sins, a collection of plays reflecting a sardonic look at the human condition.

However, the work’s structure is problematic at best. It primarily consists of Hood’s six morality plays, which were onetime staged readings with actors sitting in chairs, addressing either the audience or each other. (This “readers’ theater” hews to experimental theater initiated in the ‘60s, often called “black box theater.”) These scripts—with all the stage directions intact—are commingled with Hood’s professorial musings on the meaning of allegory, thoughts on Voltaire, and references to multiple philosophers and Aristotelian virtues of “sophia,” “nous” and epistēmē, phronēsis and technē. Diagrams are included.

The scripts consist of characters taking turns delivering lengthy, introductory monologues prior to engaging in angry confrontations with each other. (Although the Seven Sins painstakingly describe their individual traits, when they vociferously argue with each other, they sound exactly the same.) “Shut up!” is a go-to phrase; additionally, one character will react to another’s dialogue by calling it “endless droning,” or “bloviating.” If the characters find the dialogue off-putting, where does that leave readers?

Scenes consist of disjointed pontifications, absent of dramatic intent. Modern-day topics (Facebook, Twitter, Big Data) are tossed in without any in-depth exploration. Characters are either allegorical (“Greed,” “Pride”) or self-defining (“Bottom Line,” “Mr. Science”), rather than human, which would have made them far more compelling.

In the end, readers are left to wonder: Who is the intended audience? Postdoctoral candidates? Hood himself? One thing is certain: This is not material meant for a general readership.