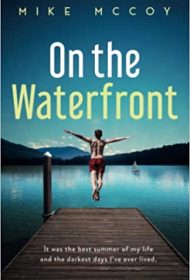 In this fictional coming-of-age tale, based on the author’s experiences, a young boy faces his fears in the Oregon outdoors.

Thirteen-year-old Danny Novak is excited to spend his summer as a staff member at Camp Baker on a lake on the Oregon Coast. Despite the minimum age requirement of 15, he was hired because of his “strong desire to work.” He knows he’ll be the youngest on staff, but believes his age isn’t a “big deal” and he’ll quickly fit in. “Easy as pie.”

But Danny soon discovers his age does matter, as much of the staff is at least two years older and already acquainted with each other. Assigned to work in the kitchen, Danny soon finds himself on the wrong side of his co-workers and wishing to be back home, even though he’s bullied there and lives with his divorced mother, who is more interested in dating than mothering Danny and his brother.

Then, Danny gets the opportunity to try out for the waterfront staff. He’s a good swimmer but hasn’t swum in a lake before. The size and creatures in it scare him so badly he nearly wets himself. An older boy, the fearsome Mark, saves him from embarrassment, but is punished for his perceived unsafe behavior. Now, Danny must spend hours under the watch of Mark, who is rumored to have been a suspected murderer and isn’t happy to be stuck teaching Danny to swim.

This is written in memoir style with a strong voice, lush description and colorful details of life in rugged rural Oregon. While at times, the everyday events of a teen’s life slow the pace, the threat of impending tragedy works to keep the plot moving. Unfortunately, after pulling readers along to the climax, the author delivers a conclusion weakened by clichés and melodrama.

While the disappointing ending impacts the story’s overall success, the novel may appeal to readers who enjoy coming-of-age tales in a rich setting.