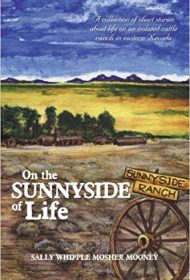 In this entertaining collection of stories, author Sally Mooney shares the joys and heartaches of her childhood on an eastern Nevada ranch, a childhood she shared with a calm, sensible mother and an unpredictable, ill-tempered father. The tales are candid and sometimes painful, but told with a dauntless sense of spirit.

The stories begin in 1898 when the author’s grandfather discovers the settlement that will eventually become her beloved Sunnyside Ranch. The first winter, the little family scrapes by in a two-room cabin with a wood-burning cookstove and an outhouse by the creek. By the time Sally Jo comes on the scene 40 years later, her parents have leased the ranch from her paternal grandfather and turned the neglected property into a respectable working ranch. Sally Jo grows up surrounded by family and farmhands and often enjoys an almost idyllic childhood.

But the experience is marred by her father’s moodiness and fiery temper as he battles what she now understands was depression. The child is strong-willed and bright, and in her way fearless, as evidenced by her move from the ranch to Ely, Nevada, so she can get a proper education. Homesick for the ranch and out of place in the city, Sally Jo wastes no time making a reputation for herself, earning punishment time after school, sitting on the administration office floor nearly every day of the week. When her mother buys her a baton, Mooney writes, “I loved my new baton and I practiced twirling it … every day. I also took it to school and whacked anyone who bothered me.”

This is a delightful read, recounted with telling detail, vivid characterization and humor. It should appeal to any reader who enjoys an engaging story set in an often hardscrabble landscape where life could be difficult, but was always lived fully.