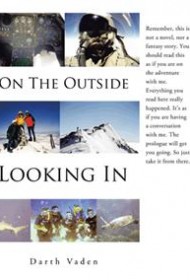 On the Outside Looking In is the author’s account of an adventurous life. “You should read this as if you are on the adventure with me,” author Darth Vaden notes on the book’s cover. “…It’s as if you are having a conversation with me.”

Like the man himself, Vaden’s memoir is unconventional. There’s no exploration of family roots or growing up; his birth, childhood and arrival at college are covered in just over a page. Nor is there scrutiny of how or why certain events in his life unfolded. Vaden concentrates instead on his adventures.

A former Marine and pilot in the U.S. military, Air National Guard and for FedEx, Vaden has also worked for NASA (though details on that are sketchy) and traveled extensively. The book is built around those trips. He climbs mountains on several continents, goes on African safaris, canoes and kayaks, and dives in exotic locales. All of this is told in the conversational prose he promises on the cover, as in: “This would be my second trip to Africa and perhaps the best! I flew to Capetown, South Africa,over [sic] 15 hrs [sic] direct from Atlanta on South African Airways. I had a business class seat, so it wasn’t too bad.”

Told in this straightforward fashion, Vaden’s journeys become reminiscent of watching home movies, rather than reading an artfully crafted, polished narrative designed to draw readers in with tension and carefully chosen detail.

Vaden also could have used an editor. The book is rife with punctuation errors (backward quotation marks, misplaced apostrophes, random, mid-sentence semicolons and so on) and misspellings (“volkswagon,” “was’nt,” “trajedy, a “crueling” hike). Sentence fragments, run-on sentences, and the jarring interchange of present, past and future tense also abound.

Vaden has certainly lived an interesting life. While this book will no doubt enthrall those who have travelled with the author, however, it’s less likely to resonate with general readers looking for gripping armchair adventure.