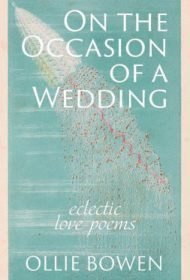 As the title of this collection indicates, Ollie Bowen’s poems belong to the tradition of occasional poetry, written (per the dedication) for “Kristi and Matthew—who are receiving this book as a wedding gift instead of something more practical off their registry.”

Throughout, the author displays a superb vocabulary and deft range of literary, artistic, and historical references, which add depth and texture to her work. For example, Bowen writes, “Together/ we sit atop/Diotima’s ladder.//Eternally one,” referring to the ancient Greek philosopher whose ideas shaped the concept of Platonic love. In a similar vein, “Creationism, According to Rumi” invokes the iconic Persian poet to characterize the origins of a couple’s love, and “A Handkerchief for Pavo” references the famed opera singer Pavarotti while describing the allure of a beloved’s voice.

Poems often provide fresh, intriguing imagery. For instance, “the wild tarragon grows, amidst unwanted butterweeds” is a memorable description of a natural landscape that resists clichés. Other examples include “foul saline swamp/of brownish tea/ fertile nursery of fragile souls” (describing mangroves)  and “Subjugate me deeply/ with arris and mango/ hidden in the sisu trunk.”

Sometimes poems take expository turns and could benefit from editing or elision, as in “You’re the only man I’ve ever met/ who seems to have the faintest conception/of what I mean when I write something,” which lacks sensory details. The poet might also consider removing humorous light-verse poems like “A Little Drunk” and “Freudian Slips Of(f) the Thong,” as they undercut the elegance and gravitas of the rest of the book.

Overall, these poems show much promise in their prosody, imagery, and complexity. They will certainly appeal to Kristi and Matthew—but also anyone else who has confronted the intricacies of love.