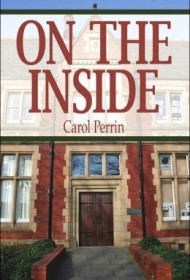 Growing up in Cadillac, MI., Carol Perrin made more than her share of mistakes. She did poorly in school, spent her lunch money on cigarettes, smoked marijuana daily and left home to live with a boyfriend. Had it not been for three men — a counselor, an American Studies teacher, and an assistant principal — she doubts she would’ve made it through high school.

Three marriages, two children and two bouts of breast cancer later, at age 41, Perrin has come full circle, volunteering in public schools where she shares her stories of past mistakes with the kids she mentors. “Am I proud of my past? Not by any means,” she writes, “but if a student can learn from my mistakes or my own children, for that matter, then I have no regret in having made them.”

As evidenced by the tributes students have contributed to her book, On the Inside, she’s clearly making a difference: “You are an awesome roll model (sic) for kids of any age,” writes one. The book is no less heartfelt — though unfortunately less successful.

Among its major flaws, the book lacks organization, with the author offering life advice, anecdotes about her students and her own story without an overriding structure or chronology. It also lacks a cohesive, consistent voice, with Perrin addressing her remarks variously to parents, students, teachers, her family, and readers.

For a book that was written with students in mind, there are a surprising number of glaring grammatical errors: “I felt bad and wanted to tell the teacher I had did part of the assignment…”

Toward the end, the book devolves into an assortment of Internet parables, poems, and song lyrics, some of them attributed, some not. Despite solid advice for children on such topics as bullying, self-esteem, grades, drugs and suicide, On the Inside – though telling a courageous story – is significantly flawed as a reading experience.