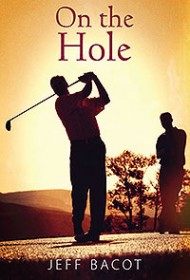 In Jeff Bacot’s engaging novel, Jay and Nick are 40-something golf buddies with wildly different lifestyles. Jay, who carries a few too many pounds, is the hard-partying vice president of SinTex Records. Nick, a physically fit husband and father of two, is a driven junior partner in a Fort Worth law firm. Nick takes every aspect of his golf seriously and considers it a temporary escape from his oppressive life. Jay loves golf because it’s “like having a bartender, psychologist, and priest next to you all the time.” He is the type to grip it and rip it, yet he still scores pretty well.

As they meet on the first tee this particular day at the prestigious country club where they belong, both are troubled by negative vibes. Jay keeps having strange encounters with an elderly couple and faces other unexpected threats. Nick is distracted by disturbing cell phone calls from a shady client.

Chapter by chapter and hole by hole, the men share philosophies about women, the fact that men’s value is often judged by their net worth, religion, unconditional love, friendship and more. By the back nine, the discussion becomes heated, as each is forced to face truths about themselves that they had suppressed.

On the Hole is a thoroughly enjoyable read with good pacing and well-drawn, likable main characters. It sparks with just the right amount of golf lingo, crude guy talk, raucousness and swagger to make it believable. The men’s friendly banter and philosophizing is right on target and the writing is current and crisp. After angry words are exchanged, for example, the author writes, “The static of their argument crackled in Nick’s head like the scratchy irritation of a dial-up Internet connection.”

This entertaining novel is sure to appeal to a wide swath of male golfers, as well women seeking insight into what guys really think and say while lofting balls down the green.

BlueInk Heads Up: The Star designation is offered with the understanding that minor copyediting issues remain in need of attention.