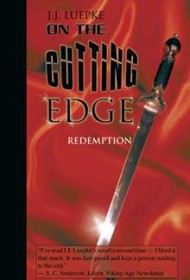 In J.J. Luepke’s novel, On the Cutting Edge: Redemption, Cassandra Coven is sleeping her way to the top at Sanderson & Sons Agency when the talented new girl -–young, competent Josie Buchanan – arrives on the job. Threatened by Josie, Cass begins taking credit for Josie’s ideas and trumps up reasons to reprimand her. Worried and embarrassed by her boss, Josie sends out resumes to agencies in New York City, even though it would mean moving away from her beloved grandmother. When she is threatened at knife point by an intruder who says, “leave town forever or face the cutting edge,” Josie takes a job at a prestigious agency in New York, where she finds love and success — and ultimately, revenge.

Luepke’s slim book is similar to short stories that used to appear in “women’s magazines,” the kind in which the small town heroine moves to the big city and through a series of happy coincidences finds immediate success in her career and – more importantly – true love. Luepke follows that formula to the letter, right down to the damsel in distress rescued by the handsome prince.

The author has a fluid writing style, but she’d be better served honing her talents on a story a little less clichÃ©d than this one. The mystery of who threatened Josie with the knife isn’t a mystery at all, and the revenge is neither smart nor satisfying.

If, on the other hand, the author was intent on writing an old-fashioned fairy tale, she may just have succeeded. All the elements are there, right down the wise and understanding fairy godmother – or in this case, the beloved and supportive grandmother – and the thinly disguised witch, Cass Coven, complete with the telltale last name. Those looking for a happily-ever-after romance will find it here, but anyone hoping for an edgier and more realistic plot will need to look elsewhere.