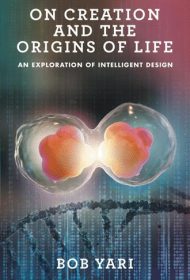 In this essay collection, Bob Yari contends that species changes thought to be engendered by evolution are far too complex to have been brought about simply by natural selection.

Yari begins with a caveat: We can’t know for certain if there’s a god or even what reality is. Thus, he notes, his idea can only be regarded as a hypothesis.

He then supports that hypothesis by noting how even a single core cell is so intricately advanced that it “would have to have been created with an extremely sophisticated level of planning and design.” Additionally, “no amount of genetic mutation could ever account for the massive degree of sophistication in the complex animal sexual reproductive system.” Instead, he posits, the evolutionary mechanism must be “an element of a planned design by an intelligent Creator.” The Creator “could have built a mechanism […] within the life-form for it to evolve and adapt itself to the changing realities of its environment.”

Yari’s theory seems to be a variant of intelligent design in which William Paley’s God as watchmaker imprints His structure on evolution. But Yari’s version of God is “unlike the God set forth by most religions,” he writes. Yari’s “Creator,” if it exists, “would be […] something undefined other than it possesses immense intelligence, logic and abilities….”

Yari’s writing is clear, though somewhat myopic. In his dismissal of the God of “most religions,” for instance, he doesn’t even consider the work of philosophers like Aquinas, Avicenna, Anselm and Descartes. More importantly, he doesn’t explore Paley’s argument for intelligent design, surely a precursor to his own theories.

Yari does better in his mention of post-Darwin theorists like Phillip Johnson and James Tour, but these references are too brief. Also, regarding his ideas concerning epistemology, Yari doesn’t show their philosophical groundings in Descartes, Kant and Zeno.

Such omissions greatly undermine this work. Nevertheless, as a sample of a contending approach to natural selection, On Creation is an instructive read.