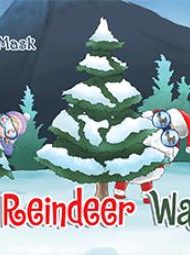 A young girl and her brother celebrate Christmas with decorations, cookie baking, and their own special preparations for a late-night vigil in the picture book On Reindeer Watch.

Christmas Eve has finally arrived, and two siblings are ready for their favorite Christmas tradition: the Reindeer Watch. The children, addressing readers, share their recipe for reindeer feed, and after setting out Santa’s milk and cookies, head outside to scatter the reindeer goodies. The kids keep watch at the window, but ultimately get tired and their mother summons them for bed.

On Christmas morning, there are reindeer hoof prints inside the house, and the children feel great satisfaction for doing their part to offer rest and refreshment to Santa and his helpers—while hoping to catch sight of Santa and his reindeer next year.

A charming tale of ceremony and anticipation, the story is told in rhyming verse, a choice that sometimes falters. Several lines deliver uneven rhythm or strain unnaturally to fit the end-rhyme scheme, as in: “But between you, my brother and me; there is one Christmas tradition that will never flee!”

The art is delightful in its depictions of the children, their pets, Santa, and the reindeer, and the illustrations strike the perfect balance between detail and simplicity. The art’s only flaws involve their occasional mismatch with the text. For example, one page shows the children looking out the window at a tiny silhouette of Santa and his reindeer high in the air, yet the children comment: “[..] is that Rudolph’s nose I see coming through the gate?!” They also see “the whimsical breeze,” something not depicted in the illustration. Other minor technical flaws, like the use of “its” instead of “it’s” impact the presentation.

Despite such missteps, On Reindeer Watch is a colorful offering with a fun story that should bring holiday cheer to young children.