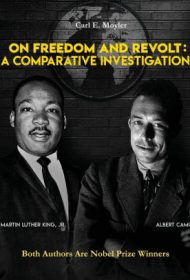 On Freedom and Revolt is a doctoral thesis by Carl E. Moyler, which applies comparative literature analysis to the concepts of freedom and revolt as related in the work of Martin Luther King, Jr. and Albert Camus. Engaging extensively with each figure’s writings and their individual historical contexts, Moyler teases out numerous similarities in their projects of social justice, as well as noticeable contrasts.

The picture Moyler paints is of two figures keenly aware of historical and ongoing injustices, who sought to define and justify theories to combat oppression and achieve a more humane society. Each lived short but exceedingly consequential lives against the backdrop of various global and local conflicts (such as the Holocaust, the Cold War, and several racist regimes) and both men actively organized against these dark forces. In turn, each was ostracized by powerful interests even as they gained influence in their respective cultures.

Nonetheless, King and Camus diverged with respect to God and, consequently their views on suffering. King, the theologian, believed in redemption borne from suffering, whereas Camus, the humanist non-believer, saw no room for any divine redemption.

Those interested in either figure will find faithful surveys of each in On Freedom and Revolt. But while Moyler sees himself as filling a gap in extant scholarship, the specific instrumental value of the comparison is unclear. Nothing in his analysis adds value or foundation to either figure’s philosophies, because the author has opted to simply describe each author’s work as it exists rather than critically evaluate the book’s subjects from any theoretical perspective (e.g. ethics, social theory, etc.). As is characteristic in this style of academic writing, each of Moyler’s claims is redundantly sourced, and opinions are scarce. Moreover, each section summarizes its predecessor, bloating the pages and blunting the rhetoric with stultifying repetition.

The end result is a book faithfully researched but devoid of provocative insights—one better suited to its original academic context than for a wider audience.