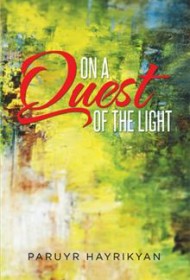 The nonfiction novel is a genre that uses fictional devices while sharing true events. Author Paruyr Hayrikyan attempts this form in On A Quest of the Light, his autobiography written in novelized fashion.

Here, Hayrikyan describes his work to liberate Armenia from the Soviet Union, which began in earnest in 1967 and led to his being followed by the KGB, interrogated and imprisoned for a total of 18 years. His liberation work—including an attempt to burn a portrait of Lenin using a cigarette and gasoline—required that he use a pseudonym with Lusineh, a young woman he fell for in the early days of his heady revolutionary activities. His unexplained absences and inability to share personal anecdotes took their toll on the romance, and the book is loosely structured as a letter to Lusineh (a pseudonym) that explains what he could not when they were together.

There are some fine passages here. Sharing a cell with a prisoner dying of tuberculosis, Hayrikyan describes threatening to kick the man in the head if he doesn’t stop coughing, then is contrite about his rage. He skillfully captures the rapid-fire emotions of a life of stress and uncertainty.

The English translation occasionally suffers from a stilted quality, although the author’s main points come through well. More problematic are the frequent asides about the creative process and other forms the story took before it became this book. Hayrikyan often mentions the original short story he wrote before turning the material into this book, the fact that a friend recommended it be made into a movie, people’s concern that he used a pseudonym for Lusineh and other comments, all of which interrupt his narrative flow and distract from the larger story.

Armenian history is ripe for a creative nonfiction treatment. On A Quest of the Light offers interesting material but requires a more vibrant translation and the elimination of such unnecessary asides in order to reach its potential.