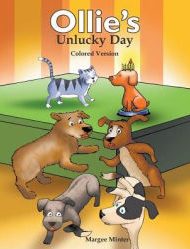 Lucky, a friend of Ollie’s, watches from a tree outside as Ollie’s mother prepares a cake and Ollie’s friends arrive. When Ollie gets home from school to find a birthday party in his honor, the dogs all have a great time, while Lucky stews jealously outside. Finally, Lucky sneaks into the house and jumps on the table to help blow out the final candle. Her loud “meowwwwww” breaks up the party and sends the dogs running.

Minter’s story contains a wonderfully quirky and original idea in which the dogs remove their tails upon entering the house, hanging them on a hook; later, Lucky’s surprise entrance scares the dogs and they rush out after hastily grabbing the wrong tails. Children will enjoy the wackiness of this mix-up.

Unfortunately, the book seems rushed near the end, and doesn’t reach a satisfying conclusion: there’s no resolution to Lucky’s being left out, and the text doesn’t offer any constructive solutions to his jealousy, instead showing him unintentionally ruining the party.

Other problems include the repetition of an image of Ollie’s mother on two separate pages (while the background and some accompanying details are changed, it remains distracting). In one sentence, the punctuation is confusing and would be better served by semicolons: “There was a new chewy bone from Susie Spaniel, a doggie sweater, for cold days at school, from Billie Birddog, a new mystery book, The Disappearing Dog Bone, from Daisy Dalmatian.” Additionally, the book’s justified text sometimes results in unusually large gaps between words, which can be bothersome.

Revision to clean up these issues and with an eye to offering a clearer message would enhance the story. Still, the illustrations are bright, colorful and compelling, and children who have been left out by others will easily relate to Lucky’s hurt feelings regarding the birthday party.