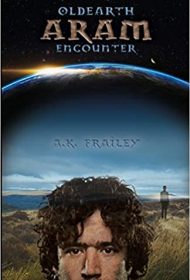 Author A.K. Frailey’s first installment of the Oldearth series, Aram Encounter, drops readers into a prehistoric time where clans of early hunter-gatherers, farmers, herders, and others clash and collaborate while being observed, unknowingly, by more technologically advanced galactic neighbors.

Top among the celestial crowd is Teal, a shape-shifting guardian whose job is to travel the galaxy observing and assuring no planet or being is exploited by other galactic peoples (earthlings are the most vulnerable, given their simpler technology and ignorance of the others). Other galactic colleagues, some well-meaning and others murky, join him on excursions to Oldearth as the story reveals the extra-terrestrials’ various dramas.

But the bulk of Aram Encounter centers on the earth characters from three clans—Lake Clan, Grassland Clan, and River Clan—who compete and cooperate with each other over the course of Lake Clan leader Aram’s lifetime. These characters include: Aram; his grudging and handicapped wife, Namah; friendly Grassland Clan leader, Onias; his wise healer wife, Jonas and the haunted and edgy River Clan leader Ishtar. Together, the clans face warring outsiders, ruthless giants, wild animals, and natural disasters.

Frailey writes in a crisp, lean, and richly detailed style, building a fascinating, absorbing world. The story has a few impediments, as well, however: Some key figures feel undeveloped, including Teal, Namah and Ishtar. We learn Namah’s backstory late, and when we do, it doesn’t explain enough about the long tension between her and Aram: Why did Aram choose to marry her when he has deep prejudices towards the handicapped? And Ishtar, who rises through his strong morals and character to succeed his cruel father as the next River Clan leader, then becomes the opposite with no clear explanation

These issues aside, Frailey delivers a dynamic multidimensional twist to an otherwise prehistorical drama, something of a cross between Jean Auel’s Clan of the Cave Bear and Ursula K. Le Guin’s Earthsea series. Readers will hope to learn more in future sequels.