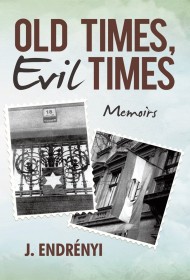 In his memoir Old Times, Evil Times, Hungarian-born John Endrényi offers a beautifully written account of his experiences growing up during the Second World War. Endrényi intertwines personal narrative with an engaging retelling of the war’s surrounding history, politics, and place to create a thought-provoking story that contains a great deal of depth and emotional force.

As a child of Jewish origins growing up in an increasingly anti-Semitic Budapest, Endrényi emerges as an affable character from the beginning of the book. He endures startling persecution under Hungary’s Horthy regime, but at the same time, he’s still a child learning to make sense of the world around him. As an adult narrator, he retells those moments in humorous exchanges that lighten the burden of religious differences, sadistic schoolteachers, and teenage cruelty.

At the height of the conflict, Endrényi and his family become separated, and as a 16-year-old, he’s assigned to work with a forced labor unit digging trenches on the outskirts of the city to stop the tanks of the advancing Russian army. He witnesses random murders and recounts how thousands of Jewish people were machine-gunned into the Danube or deported to places from which they never returned. Endrényi manages to survive — through great determination and sheer luck — and he lives to tell his story as “a heartfelt human cry expressing the hopes of thousands of people.”

At little more than 100 pages, the book leaves readers wanting more; the author could have easily carried his audience through a narrative of much greater length. But what’s here is compelling. While readers who haven’t lived through experiences similar to those of Endrényi might expect to encounter difficulty relating to this story, the opposite is actually true. Endrényi transcends his personal narrative and reaches a universal height with a story that will connect with all those who have the enduring capacity for hope.

BlueInk Heads Up: The Star designation is offered with the understanding that minor copyediting issues remain in need of attention.