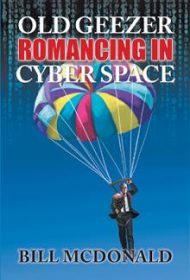 The world of Internet dating seems to be the province of the young, but that’s not always the case. At age 69, divorced and retired, author Bill McDonald posted a profile on a dating site and followed his bliss as women responded. Old Geezer Romancing in Cyber Space recounts a mix of triumphs and “What the heck just happened?” moments.

McDonald was a journalist for many years. He brags about his love of the written word but also pokes fun at the agonies he suffered composing a dating profile, only to be shot down by women who found some of his profile comments sexist. (He writes, “I feel like a rabbit in a lettuce patch” when surrounded by women.) Six women replied that they were highly offended. One woman said, “That’s the vilest, most sexually oriented profile I’ve ever read on Match.com.”

Accounts of his dates are tasteful, however, and not sexually explicit, and while the book is clearly intended as light reading, there are occasional dating insights. For example, when a friend calls out his tendency to take women out for lavish multicourse meals, suggesting a simple cup of coffee would be a better starting point, McDonald asks around and is surprised to hear women agree.

He meets a variety of women and seems to enjoy their company, and if he’s critical of certain behaviors, he allows equal time for grievances from their side. Sillier stories, like one about a woman who came outside to “smudge” him with sage smoke before allowing him indoors, keep the mood light.

McDonald’s writing is witty, but typos throughout should have been caught by a sharp-eyed editor.

Old Geezer Romancing in Cyber Space is entertaining, and anyone trying to craft a great second act via online dating will find it easy to relate to – and perhaps a source of useful tips. It’s not a deep dive, but it offers a realistic view of the dating landscape.