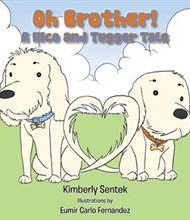 Oh Brother! is a rhyming picture book about sibling rivalry. Written in two parts from each dog’s perspective, the book stars Nico and Tugger, boisterous and jolly white dogs who must figure out how to get along.

Chapter one is titled “Nico’s Tale.” Nico has been the No. 1 dog for a long time when his perfect little kingdom is disturbed by the arrival of a curious, playful, irritating puppy named Tugger. Nico thinks the new puppy is just a big baby who steals toys, food and Mom and Dad’s attention and affection. His feelings are hurt. At first Nico refuses to share with the puppy, but slowly he comes to find the puppy’s pranks amusing. Having a new little brother isn’t ALL bad.

Chapter two is titled “Tugger’s Tale” and introduces the puppy’s point of view. All little Tugger wants is to play with his new big brother Nico, but he is rebuffed at every turn. Only when he learns to respect Nico’s boundaries (such as allowing him to go to the front door first when the bell rings) do the new brothers learn to get along. Soon they are the best of friends.

Kimberly Sentek has written an amusing book about the arrival of a new sibling that many children will relate to. Unfortunately, the book’s rhymes aren’t complex or compelling (me/be, red/bed) and, thus, the text is less engaging than it might have been. Eumir Carlo Fernandez’s illustrations are active and fun, but one wishes the two dogs were given additional defining visual characteristics to help the reader distinguish between them. In the end, the timeless appeal of the topic of siblings getting along is this picture book’s greatest asset.