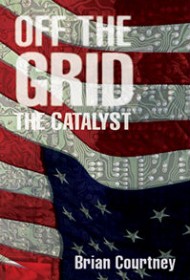 A young Colorado man’s aversion to collective authority is vividly illustrated in Off the Grid: The Catalyst, a work of dystopian fiction that depicts its protagonist, Pan, dealing with an increasingly fascist version of America. His concerns are borne out when the book’s America actually does mutate into a burgeoning re-creation of Nazi Germany.

The book opens with an overview of Pan: His name is an alias, just one step he’s taken to stay under the radar of what he calls “The Institution.” That term refers to “everyone and everything all the way down to the streets on which we drive… the government and the infrastructure… the schools and clergies… where we live and where we shop.”

As the story unfolds, Pan battles with local police, witnesses the deportation of some Mexican comrades and deals with issues related to eminent domain, among many other clashes with authority. Much time is also spent on Pan’s lengthy diatribes about “The Institution,” partying, chain-smoking and getting laid. An apparent terrorist bombing that plays a major role in the emerging national police state occurs in St. Louis; placing the action closer to Pan might have provided some more compelling plot developments.

Author Brian Courtney displays an affinity for the basics of storytelling, dreaming up colorful scenarios throughout and devoting space to world building. The book doesn’t lack for descriptive scene-setting or dramatic encounters, but it’s less successful at delivering much in the way of nuance; virtually everyone at an authority level is characterized as plainly malevolent. An appreciation for the book also could depend on one’s tolerance for Pan’s unvaryingly antagonistic demeanor.

The book has frequent issues with spelling and hyphen use, and readability is hindered by the absence of commas in many places where they’re needed for grammar and clarity. Despite such issues, Off the Grid: The Catalyst has some entertaining scenes and touches on provocative ideas that may appeal to readers who appreciate such dystopian fare.