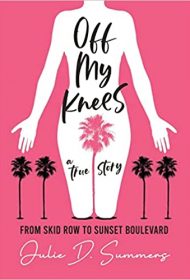 After hitting rock bottom following a life marred by sexual assault, addictions, prostitution, and imprisonment, Julie D. Summers survived the stormy years and later thrived in her pursuits. She documents her moving experiences in her memoir, Off My Knees: From Skid Row to Sunset Boulevard.

When she was 15, Summers was sexually assaulted by her mother’s friend. The tragic event derailed her life, and by 18, she became pregnant and gave her child up for adoption. Haunted by her decision and willing to do whatever it took to get her baby back, she fell into prostitution. Her life continued to spiral as she struggled with substance abuse through the years.

Summers highlights the uplifting and practical lessons she learned, which readers can apply to their own lives. She lauds self-confidence, living intentionally, forgiving and loving oneself, and learning from mistakes. She discourages self-pity and holding on to destructive internal anger. She also offers helpful lessons about finances, faith, and relationships. Interactions between her and her psychologist are included, in which she reflects on the psychological impact her past traumatic events had on her.

The text is enhanced by vivid, clear photographs of many of those mentioned. Evocative scenes, raw in their description of each painful event Summers encountered—including her arrests, prison time, devastating drug addiction, involvement with prostitution, and more—render her feelings of anger and desperation palpable.

It’s unfortunate the book focuses mostly on the difficult years, rather than the times that reflect positive changes in her life. It would have been helpful to see the transition. The book’s coverage of her political work on behalf of the Democratic Party and the homeless is sparse. The awards she received from 1994 to 2010 for her success in both arenas are summarized in a brief section without specific details

This aside, readers seeking motivation to change their lives will find hope and strength in Summers’s powerful story.