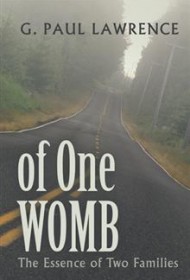 In G. Paul Lawrence’s novel Of One Womb, Dorothy Walker has her life all planned. She’ll graduate from high school, marry her sweetheart, a football star, and raise their children in the small town of Minden, Louisiana.

She and Fred Tucker are married in 1969, but by the time their son, James Lee, is born a year later, their relationship has already started to unravel. Fred doesn’t enjoy married life and spends most of his time partying with local teen-agers instead of taking care of his new family. Dorothy finally gets up the courage to leave, and begins to build a life of her own with her young son, but Fred’s parents don’t want to lose their grandchild. Fred’s father has powerful connections in Minden, and he manages to take the child from her.

Heartbroken, Dorothy moves to California, where she meets the love of her life: Jesse Barns. He is everything Fred isn’t — caring, responsible, destined for success. He is also African-American; Dorothy is white. Dorothy and Jesse build a life together in California, but she hides her newfound happiness from everyone in the small Southern town where she grew up. When James Lee reenters their lives as a broken young man connected to a white supremacist group, Dorothy refuses to give up on her eldest son who has come back to her after so many years. Her perseverance and James Lee’s desire to improve himself, change their lives forever.

Of One Womb tells a compelling story of breaking the bonds of racism. But it’s shackled by bad punctuation, long, unnecessary narratives (the first three pages detail a high school football game riddled with puzzling sports jargon) and annoying misspellings that strongly suggest a careless use of spell check. If readers can look beyond such mistakes, Of One Womb presents an intriguing story of how love can conquer conflicting beliefs.