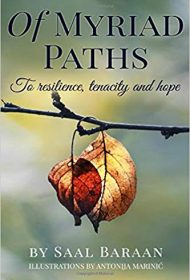 As a physician, Saal Baraan was exposed to many “difficult cases” that would leave him “exhausted, sad, and wondering about potential solutions.” In his poetry collection, Of Myriad Paths, Baraan presents fictional portraits of these people and attempts to explore their circumstances and perspectives with empathy and understanding.

Baraan’s pieces range from a lyrical disquisition on what it’s like to be a burned-out doctor who “must see thirty patients a day,” to the anguished choices of a breast cancer victim (“Double mastectomy, single mastectomy”), to the post-traumatic stress nightmares of a Tibetan refugee. Skillful pencil drawings illustrate each poem.

Baraan’s language is workmanlike and seems mostly concerned with detailing the various aspects of a subject’s perception, although sometimes more complex aims are at work. Catatonia—The Third Response,” for example, focuses on a man unable to talk or care for himself, who can only watch as a caregiver tidies the room: “Dusting and cleaning starts/ Chandeliers first, mirrors next…” The simplicity of these words, however, are deceptive, as the catatonic man is also metaphorically dusted. His “Face shaved, back sores covered,” before they put him “away back in [his] place/ A body blended with furniture.”

Generally, Baraan uses four- or five-line stanzas with occasional rhymes interspersed. His poems often contain more than one voice, and sometimes, as in “Mere Mortals,” it’s hard to tell which character is speaking. Is it the dying woman who says, “No one says how far the center is,” or a medic or a soldier? Some of Baraan’s lines are also puzzling, as in “8 mm”: “Life – 120 days/ Five laps a minute.” The referent that would lend this meaning is missing here.

Baraan’s poems attempt to engender understanding of those suffering through tragic disturbances, and many of the pieces, indeed, inspire deep empathy for their subjects. Still, the work is uneven, and revisions to correct the issues mentioned would create a more effective collection overall.